"The entire world is a very narrow bridge, and the main thing is not to be afraid." — Rabbi Nachman of Bratslav

By now you’ve seen lots of news photos and video from the Women’s March on Washington and its sister marches around the country and the world. I got on a bus at 5 a.m. to go to DC; while I’d been to a few rallies and marches in Los Angeles focused on LGBT and immigration issues, Saturday’s was the first really big event I’d been to in almost 25 years. And I have to admit, there were times when that deathless line from Lethal Weapon ran through my mind: I’m too old for this shit.

It wasn’t just the leg pain, either. (My knee braces proved ineffective by noon, and the Aleve might as well have been Skittles.) I mean, there were women there with walkers and wheelchairs, so I just kept hobbling along. It was more about being happy to be there, to have shown up, to be counted, but not being thrilled. When I was in my 20s and 30s, I was always excited to be at a mass rally, to know that I wasn’t alone in my protest and that I lived in a country in which thousands of people could gather in one place to make their voices heard.

This time I couldn’t get as excited. I didn’t spend much time in the most crowded six blocks of the rally on Independence Avenue; it was claustrophobic even for someone not normally afraid of crowds or tight places, and I slowly moved back to where there was some milling-around space. By the time the rally became a march down Constitution Avenue, my knees hurt too much to join it; I sat on some stone steps and watched younger women walk by chanting “We need a leader, not a creepy tweeter!” while a millennial ran back and forth trying to start a wave among the folks on the steps. Finally, I tottered up to Sixth and I Historic Synagogue, which had programming all day, and dozed off during a session on community organizing.

Another thing that bothered me, and I don’t know if this is age or rabbinic formation, was the relentless sexual undertone and the uncreative salaciousness of some of the signs. I get the pussy hats, and they certainly made an impressive sea of pink, and yes, the event was billed as a women’s march, and DJT’s attitudes toward women are egregious, but I got a little tired of placards reading “This pussy grabs back,” and other (male and female) genital references. I don’t want to come on as a prude, but I don’t like my identity as a woman to be reduced to a single body part. Also, if you can’t come up with a sign more clever than “FUCK TRUMP,” you’re not an asset to the movement.

That said, I witnessed a lot of beauty and life-affirming spirit in DC. Posters and banners focused on love were ubiquitous, as was a full-page image from Friday’s Washington Post, showing a woman wearing a hijab patterned after the American flag and captioned, “We the People.” Besides the sheer numbers, the diversity was pretty darn good: age ranges from babies to seniors, lots of men and boys, a good representation of POCs, though Pallid Americans did predominate. People on the Metro made room, offered seats, talked to strangers. The D.C. police and National Guard members made me feel safer, not threatened. Rainbow flags and “All fired up — ready to go!” never get old. All the crazy had happened on Friday; by Saturday there was no violence, no acting-out, no panic. There was a wonderful sense of unity that I hope keeps up and turns into a left-of-center version of the Tea Party that will hammer at state and local institutions. Just please don’t call it the Pussy Party.

Next time I might stay close to home and go to a local rally; my body will appreciate it. But my soul will never forget January 21, 2017, in Washington, DC. There’s nothing like being there. 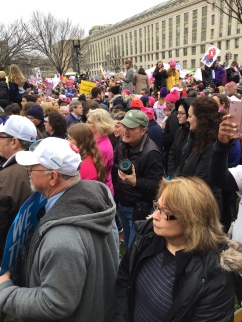 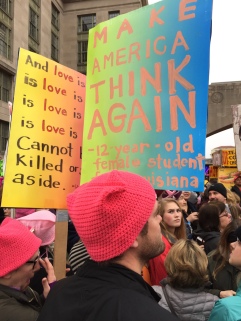 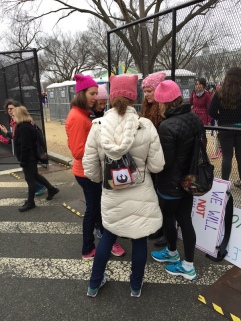 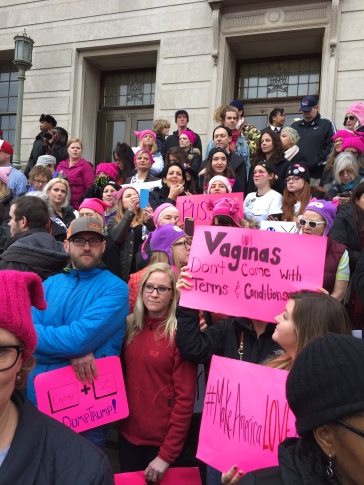 I'm a rabbi, cantor, teacher, writer, and editor who lives by the late Jack Newfield's self-description, "Radical in politics, conservative in lifestyle."

2 thoughts on “Don’t be afraid to march, even with bad knees.”

This is a text widget, which allows you to add text or HTML to your sidebar. You can use them to display text, links, images, HTML, or a combination of these. Edit them in the Widget section of the Customizer.